The Endurance22 expedition has found, filmed and documented the wreck of Ernest Shackleton’s lost ice ship, Endurance, in the Weddell Sea. Here’s what it was like to participate in that momentous discovery. 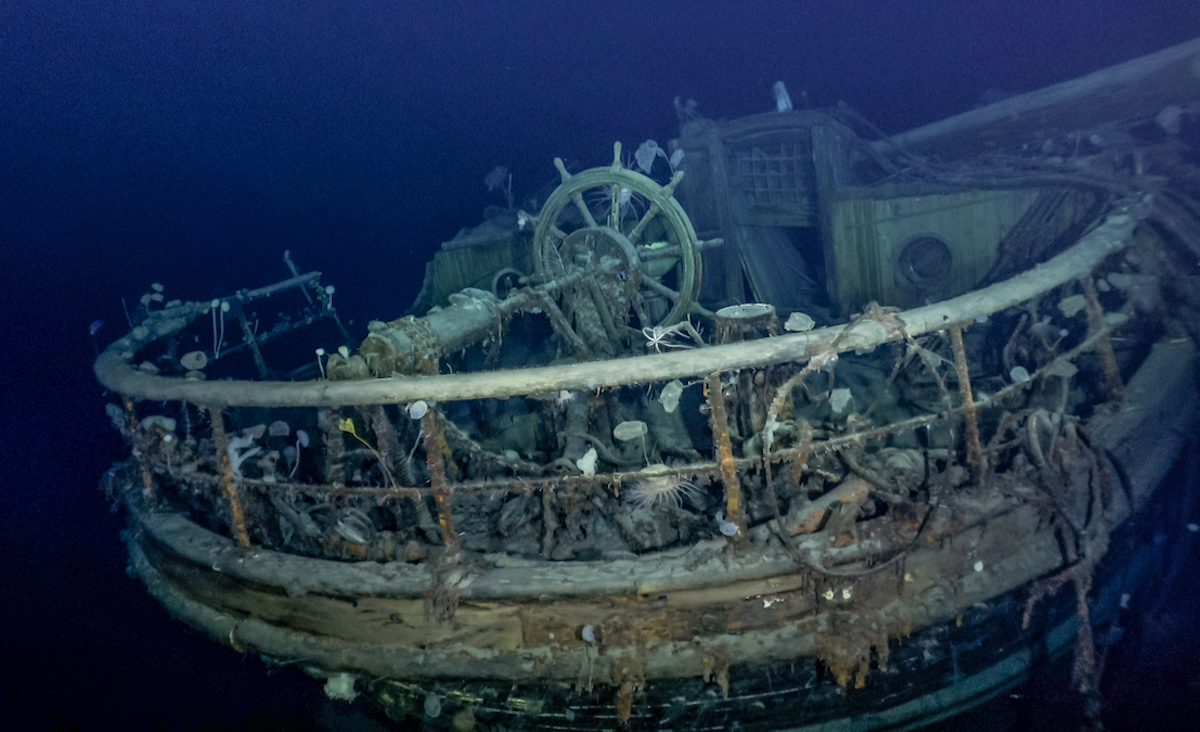 Ernest Shackleton’s Endurance is found. The world’s most elusive shipwreck, lying at a depth of some 3000 metres on the bottom of the ice-choked Weddell Sea, has been identified. There were cheers from the exhausted crew when the data showed her on the seabed. Tears when the autonomous underwater vehicle (AUV) returned safely to the surface. Remarkably, the discovery came 100 years to the day since Shackleton was laid to rest in his grave on South Georgia.

The Endurance22 team have carried out minutely detailed laser scans, filmed the wreck with high-resolution 4k cameras and broadcast those images to the world.

The wreck is in an astonishing state of preservation, at the absolute upper limit of what the Endurance22 team were hoping to find. The cold water temperatures mean that no wood-eating organisms live in this part of Antarctica. The paintwork is glistening, the nails still shine, the planks look like new. The name Endurance on the stern is still in its original colours.

As we watched the footage from the seabed there were amazed exclamations. After weeks of searching, and several false dawns, we had found Endurance.

Shackleton entered the Weddell Sea in 1914, despite warnings from whalers on South Georgia that it was a record ice year and attempting to sail through the Weddell Sea to the Antarctic mainland would be impossible. As predicted, Endurance was caught in the ice in January 1915.

By October 1915, Shackleton and his men were forced to abandon her as the ice snapped her beams and tore off her rudder. On 21 November 1915, her stern swung into the air and she descended into the black water. Within minutes the pool that she left froze over.

I came aboard the South African icebreaker Agulhas II in early February 2022 with the Endurance22 expedition. We left Cape Town and spent 10 days negotiating the swells and winds of the Southern Ocean.

By 5 March 2022, we were into our last week searching for the wreck in the Weddell Sea. The temperature was plummeting, ice was building and we could have been forced to abandon the search at any minute.

Then the AUV pilot and monitoring team saw something. It was big, and it had height, sitting well clear of the seabed. In a vast area of featureless seabed, it looked manmade. 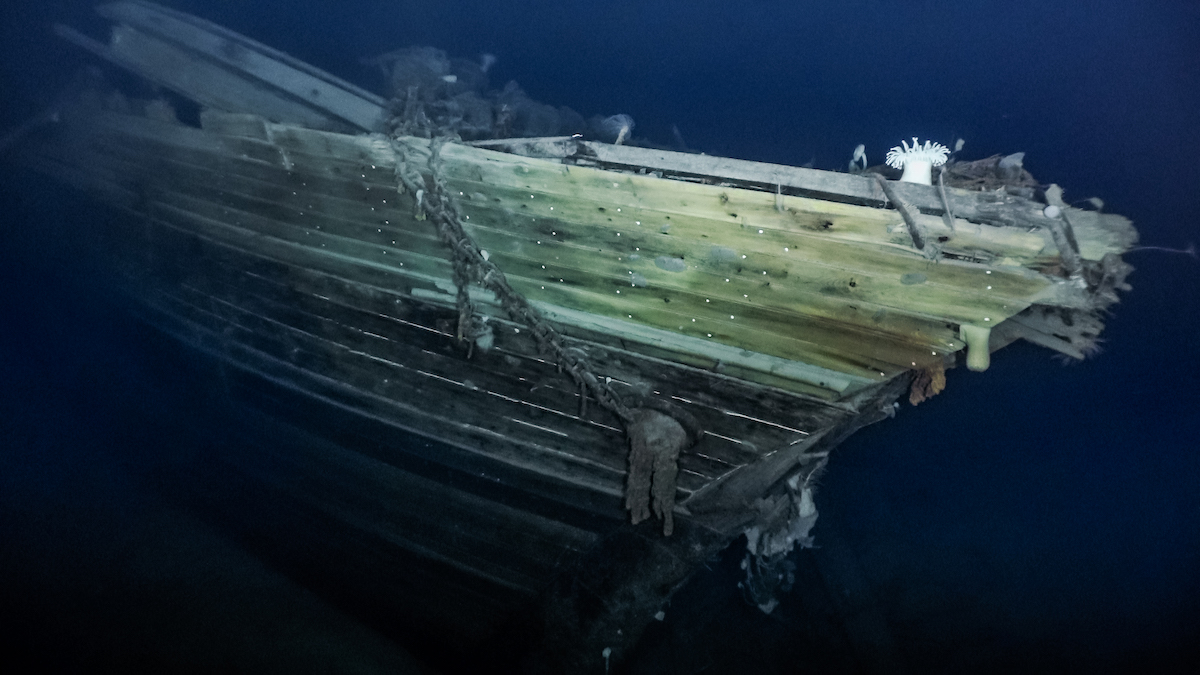 As the AUV went in for a closer look, a wall of wood appeared out of the darkness. It was Endurance’s port side. The paintwork was still intact, the planks looked like new, held in place by twinkling nails. All hell broke loose.

I was overwhelmed by a wave of relief, of deep gratitude that we would not be going back empty-handed. That the hard work and belief of so many people would be rewarded.

The drone was recovered and recharged. People worked fast, the deck fizzing with energy. Back into the water went the drone, every pass over the target yielding stunning images and data. Endurance lay on her keel, as intact as she had been in the last photos of her by expedition photographer Frank Hurley. There were smashed plates on the deck, hatchways and ladders clearly visible.

The water was clear, with a visibility of 30m at least. It felt like time travel. It was overwhelming. As the drone was piloted around the stern of the ship, we got the view we hadn’t dared hope for: the five-pointed star, and above it, the letters spelling out Endurance, still bright gold. 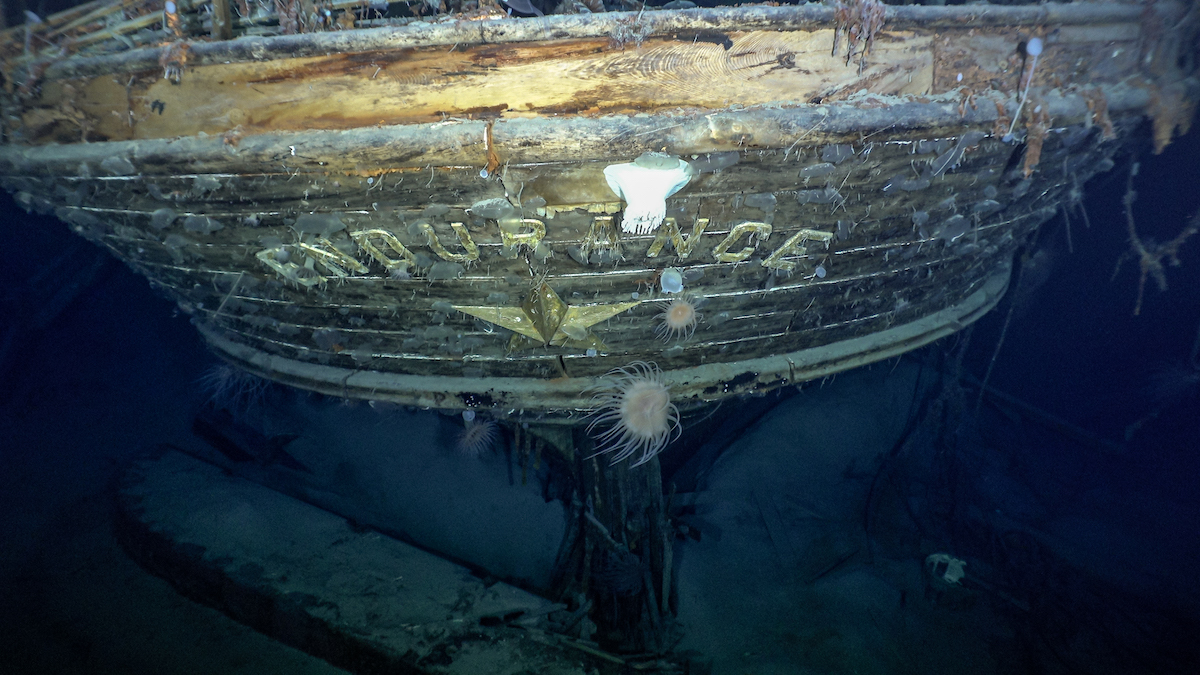 The sunken stern of Endurance, with the gold star and lettering visible. Weddell Sea, Antarctica, March 2022.

In the hours that followed, the crew headed onto the surrounding ice flow to celebrate. We played football and watched penguins. I took myself off with my copy of Shackleton’s book. I read the passages about the loss of Endurance.

I kept thinking about those 28 men who watched Endurance sink, metres away from where I sat. At the time, the idea that one day humans might be able to reach down and inspect the wreck was absurd. Subsea operations were in their infancy. The primitive submarines being used in World War One were tested to depths of 50m. Some scientists had managed to broadcast moving images but certainly not from underwater. Yet here we are just over 100 years later able to watch a live feed from the seabed kilometres below us.

We use cookies on our website to give you the most relevant experience by remembering your preferences and repeat visits. By clicking “Accept”, you consent to the use of ALL the cookies.
Do not sell my personal information.
Cookie SettingsAccept
Manage consent

This website uses cookies to improve your experience while you navigate through the website. Out of these, the cookies that are categorized as necessary are stored on your browser as they are essential for the working of basic functionalities of the website. We also use third-party cookies that help us analyze and understand how you use this website. These cookies will be stored in your browser only with your consent. You also have the option to opt-out of these cookies. But opting out of some of these cookies may affect your browsing experience.
Necessary Always Enabled
Necessary cookies are absolutely essential for the website to function properly. These cookies ensure basic functionalities and security features of the website, anonymously.
Functional
Functional cookies help to perform certain functionalities like sharing the content of the website on social media platforms, collect feedbacks, and other third-party features.
Performance
Performance cookies are used to understand and analyze the key performance indexes of the website which helps in delivering a better user experience for the visitors.
Analytics
Analytical cookies are used to understand how visitors interact with the website. These cookies help provide information on metrics the number of visitors, bounce rate, traffic source, etc.
Advertisement
Advertisement cookies are used to provide visitors with relevant ads and marketing campaigns. These cookies track visitors across websites and collect information to provide customized ads.
Others
Other uncategorized cookies are those that are being analyzed and have not been classified into a category as yet.
SAVE & ACCEPT
X